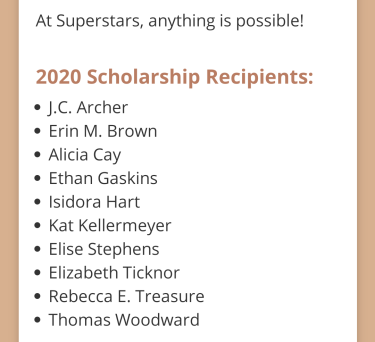 This is a long and sordid story – so hold on to your top hats, and batten down the hatches–Err, wait–wrong story.

It was a dark and stormy night — No, sorry, wrong one again, dang!

It was a regular ol’ Sunday afternoon, when little did I know, the winners for Superstars’ Don Hodge Memorial Scholarship were announced in a private Facebook post, and little did anyone reading those posts know there were two more scholarships yet to be announced. So a friend who saw the FB post reached out to me, telling me I hadn’t gotten it, and offering their sympathies.

Now, that same week I had gotten a WotF story rejection (on a story I cared about a great deal, and was shocked had gotten an R), and had something like 5 or 6 other stories rejected (in fricken record time too). So when I was told I hadn’t gotten the scholarship, it felt like something inside of me kind of broke. That last piece of straw on the camel’s back if you will.

To say I was devastated would be an understatement. I was, truly, laid to waste for the rest of the day. There were a lot of tears.
In that moment, it felt like I just could not catch a break – honestly, it brings tears to my eyes now even recalling it.
I kept thinking, okay, I’m doing the perseverance (for goodness’ sake!), I read, I study, and most importantly I write — all the time! Why isn’t something — ANYTHING — happening?!

After I got a hold of myself, I did what I always do in these moments. I gave myself a time limit. I allowed myself the rest of that evening to be sad and mourn the loss of the scholarship, then I went to bed early, and by the next morning, feet still a little heavy, but heart a smidge-bit lighter, I felt ready to head back into the foray.

Later the next night (it was a Monday to be exact), sort of late, like after 8pm – my phone rings with a number I don’t know. Now, ima be honest. I don’t answer numbers I don’t know – so why did I answer this one?

When Joy told me who she was, and that I had won a scholarship, the gears in my mind jammed and locked up. I (for reals) almost told her, “No, sorry to let you know, but actually I didn’t get the scholarship.”
As that was fighting to come out of my mouth, the news she had just shared was trying to seep in. So all that came out was, “uhh, umm, uhhh, errr, erg — uhhhhhh, duh…”
Then, my reaction got worse – I began to gush! I could. not. believe. it. It was too much. I was on overload, and I just started to babble out my happiness. This at least is how I remember it (still cringing a bit, Lol). I’m sure I made a terrible impression on that lovely lady – blargh! Sorry, Joy!

Anywho. This, I am happy to say, is one of those rainbow hiding in gray clouds stories, because not only do I get to go to Superstars this year, but for the first time ever the Writers of the Future contest generously donated TWO full scholarships (including Craft Day!!). So, no, I didn’t win a scholarship on Sunday, but I did win one on Monday!

I am probably even more grateful for this opportunity because I was so upset the day before. Because it came at the moment I felt the most beat up I have so far felt (in this writing thing I’m doing), and with a brush of angel wings, something really lovely was offered up by the Universe. A perfectly timed little pat on the back, bit of encouragement to keep me going, and for that, I am beyond grateful.

This, for me, is about more than winning a scholarship. It’s about a touch of grace when I needed it most. It’s about an acknowledgement that I’m not just shouting into the void. Which is how writing feels to me sometimes, as there is often just no feedback on what the fuck it is I’m doing (save for the occasional nicely worded rejection).

And the cherry on top of it all? Knowing that I did this has laid the soil in which an idea has begun to sprout: If I can actually, for realzies win this scholarship — then maybe I can win other things too. ♥