MileHiCon, for those among you who are unaware, is Colorado’s largest SciFi/Fantasy literary convention – it even says so on their website.
I attended last year for the first time, and had such a good time, I came back for more.

This year, I had another wonderful time.

My very first published story was released in
this year’s MileHiCon Anthology:
Adventures In Zookeeping.
I met some pretty cool writerly types,
came to a decision about the future of my writing,
and even learned a thing or two, yay! (I may also have gotten to squee over Connie Willis a bit more, but that’s a story for another day. 😉

This is a local Con for me, like literally, it’s a mile from my house. I think they pull off a wonderful array of activities, great guests, there are always a ton of things going on for kids and adults alike, and they do it pretty smoothly. At least that’s been my experience of it both years I’ve attended. They had a wonderful selection of panels, and as I’m still at the point in my Con-going where I actually attend panels, I soaked in the learning like a dry sponge thrown in the ocean. It was SO WONDERFUL!

I got to meet and chat with a few WotF contest winners, stalked Connie a bit, (really, she’s just going to have to get used to that because I’m still a ridiculously big fan of hers), and overall did better in the chatting-with-strangers department. Which led me to getting some wise words of wisdom that has spurred me down a path I had been eyeballing anyway. Really, it’s the Universe shoving me down the path, but either way, I know what my next move is. And that is a ridiculously fantastic thing, like magic! ❤

Now just for fun, here’s some of the things I collected at this year’s con…pretty cool, huh?

I watched Ms. Frost at this year’s WOTF awards ceremony in L.A. – when she won for this story! She was really nice, even showed me a thing or two about a thing or two 😉 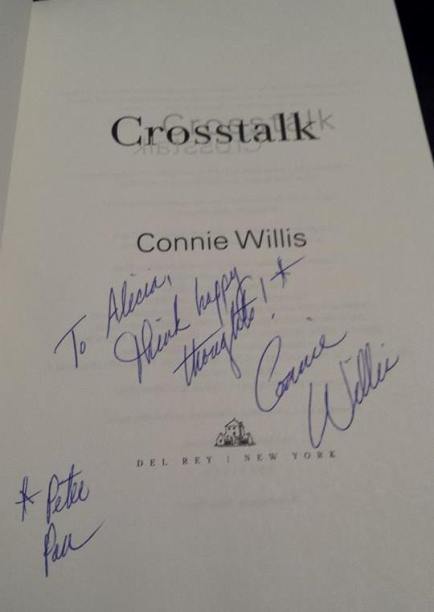 My editor’s story, in a different anthology, came out same day as ours – good stuff

Another WOTF story winner, he was on a panel, and kindly signed his sampler for me.

I did meet another WotF winner, and his story is in the volume that my Mom had purchased for me back when. Maybe one day if I get the chance, I’ll ask him to sign his story for me. It’ll be especially meaningful just because of what my copy of that book means to me.

Well, that was the Con, and just a sampling of the magical awesomeness I got to enjoy – check out the next post – all about my very first published story!! Do that HERE.