Between my studies, having moved (and therefore having to get reorganized & re-oriented), and whatever other occurring minutia that tends to steal time away, the entire last part of this year has gotten away from me. That includes my reading…bum, bum, bum! And as the list is a bit light, I’ve decided to group the last 3 months of the year together. So, here we go!

Book One:
Carry On Warrior: Thoughts On Life Unarmed by Glennon Doyle Melton

A touching memoir  which recounts old and new stories about the state of the author’s life, her past, her mistakes, and her inner most thoughts along the journey. This book definitely feels like she’s laid parts of herself bare, and for that I tip my hat to you Ms. Melton, that shit takes guts. She talks much about marriage, family, and children, which of course I can only partially relate to. But for all that, her life, thoughts, feelings, and endeavors, is pure human experience. I enjoyed it so much, I followed this read with her most recent book. (See below)

This book is a sort of ‘part 2’ of Ms. Melton’s life, updating us on how she still struggles

with life and all the challenges thrown at us. She opens up about her marriage, how she worked through opening up about her needs, about finding out her husband had been unfaithful, and how they worked through that experience. I will say, that part of the story was slightly soured for me when I discovered she and her DH had in fact gotten a divorce after the book came out. Now really, I don’t give a fig about their life decisions, that’s between she and he, but finding this out did make me feel like I had been ever so slightly lied to in the book. Take that for what you will, I’d still recommend the book. There was a line in the book that I took to heart, and although Ms. Melton doesn’t get preachy in her books, I did take procure this piece of information as advice that I’d like to try and work into my own life. In short, it was about sitting with a friend in pain, and just being there for them. Not to offer sympathy, ‘I-told-you-so’s, or even advice (and I’m a fixer, so trying to help is my thing), but just sitting there with them and allowing them to be comfortable showing and experiencing their emotions. And that perhaps is what this whole human thing is about anyway. 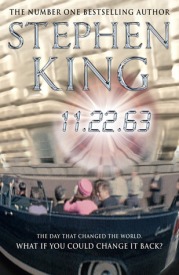 Once again proving he is a master at his craft, this book was one of the most fantastic books I have read in years. So much so that I cannot contain myself from talking about it and/or recommending it to any fellow reader I stumble across. And this book clinches for me that Mr. King is so much more than just a horror writer. No, he’s got this thing down. The pure scope of characters, story, and fun wrapped up in this book proves that! He writes so simply, there doesn’t seem to be a purple or unnecessary word involved, he’s like a pilot, flying you to your destination, all the while remaining unseen, hidden away in the cockpit. And the thing I truly marvel at, what I admire most of all, and what I endeavor towards in my own writing, is the way Mr. King immerses me into a story so thoroughly that the words literally disappear from the page, and I’m plunged into this alternate reality. How does he do that?! Time and practice I’m sure, but I’ll keep reading him and the myriad of fantastic writers out there in hopes that some of that writing magic will rub off on me 😉
Now about the story, here’s what I can say. This book will take you on an adventure, and even though I was skeptical about what he was attempting to accomplish on his journey into the past, I still fell for and adore George/Jake! I will share a line that has stayed with me, for now I’ll have to paraphrase it as I cannot find the reference, but it goes a little something like this: Perhaps the poets could burn down the world for love, but I couldn’t do it. ~Ahhh, in context that line is a heartbreaker! Anyway, want to read a good book, read this one ♥
Oh, and can I just say, I can scarce conceive of the amount of research this book took ~ wowza! King even talks a bit about that in an interview at the end of the audio book.

Book One:
The Neverending Story by Michael Ende

If you’re a child of the 80’s such as myself, then you know this movie. I grew up with it,

and in fact, my sister and I watched it so many times we know every nuance, line, and soundtrack swell in it (
we even figured out what Bastian named the child-like Empress, just from the movie!). Between my childhood love for the story, and spurred on by a recent blog post I’d read, I figured it was time to sit down with this beloved work of the imagination, for that is truly what it is. There are so many cleverly built layers to this story, it takes you even further and beyond where the movie leaves off. For the sake of candor, I will say that for me, there were some big weaknesses in the story. While there are some bigger, higher concepts laid within the story, it is still at the end of the day, a children’s book after all. Worthy of a read, but probably better read out loud to the kids at bedtime. Or better yet, for them to read out loud to you. ♥

It seems as though this book has had a bit of a revival lately. I heard some folks at MileHiCon talking about it on a panel, and interest piqued, I took it up to read it. Since then I’ve seen all these current articles coming out about the book, and how it’s story is now seemingly a possibility (heavily due to our current President-2017).
Now, I haven’t the desire to take up some big discussion on politics or feminism, there are plenty doing so out there right now. All I want to say about it, and most of what I read, is “Go read the book.” The reason it seems so scary a story, it because of its “this could really happen” dystopian vibe (just like 1984 and so many others). Its designed this way. Take it as you chose, a good read, a good story, a scary story, or a warning for our futures ~ that is after all, the magic inherent in books! 😉

I really feel like I read more than just this one book this month, but as I didn’t make a note about my December reads, I have forgotten! Here’s the one I do remember, ha~

Book One:
The Fault In Our Stars by John Green

While I am always willing to read outside my norm, this book really wasn’t for me. Actually, I was led a bit astray with this book. I took someone’s recommendation on it (someone who’s reading taste was, for me, untried and untrue!), and I got pulled into the hype surrounding the book – I think the movie just came out or something. Anyway yeah…bleh. I would like to say though, my lack luster reaction to this book is in no way the author’s fault. His writing appears competent enough and the story was, more or less, there. It just is not my bag – at all, totally not Mr. Green’s fault. And as if trudging through the book wasn’t bad enough for me, I then watched the movie – which I must say – I thought was much better than the book – and I like, never say that.

Well, that wraps up the 2016 year for me. Per my stats on goodreads I read 36 books this year. That’s an average of 3 books a month, which is almost a book a week!
But, as I believe there is always room for improvement, I’m setting an arbitrary goal of 52 books next year (at least), that’s a book a week – and there’s no almost in that! ♥