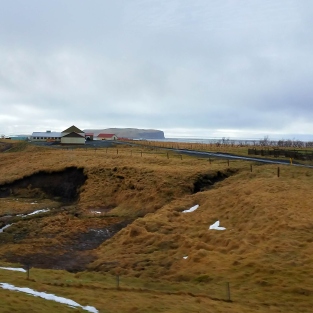 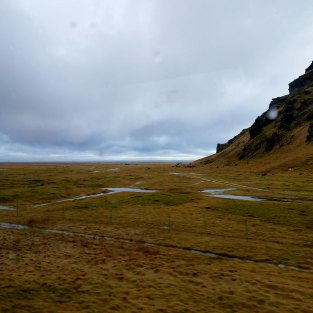 This morning our journey paralleled another tour bus group, which we had at least one good reason to enjoy, Lol. But anyway, all of us ended up at the Eyjafjallajokull Information Center, where we were treated to a short documentary film about a farming family’s experience living next to a glacier and an active volcano, and how the famous eruption of 2010 effected them.
It was a good little film – it had drama and humor, an interesting soundtrack, and beautiful footage. There was this one part where the family had to evacuate due to the ash in the air – no one can breath in that stuff – and they had to lock all the cows in the barn, then seal every air crack to keep the ash out. They left the cows with four days worth of food, but would the air last?!
It then showed the family returning to their farm, everything covered, and I mean covered, in ash. I had tears in my eyes. How long had they been gone? Did those sweet, mewling baby calfs survive in the barn?!
When the volcanoes erupt, it’s not just the danger of lava, smoke, and ash they must worry about. The intense heat melts the glaciers that sit atop them, and the danger of rushing water and flooding that reaches out for miles and miles is very real, and quite frightening.
There was a cute moment in the film as the farmer, still cleaning up the intense amount of volcanic ash on his property, bagged some of it up for a tourist. The man’s son was sitting on the tractor and the look he gave this tourist wanting dirt – made us all in the audience laugh out loud. A light-hearted way to end the film. It was surprisingly good. 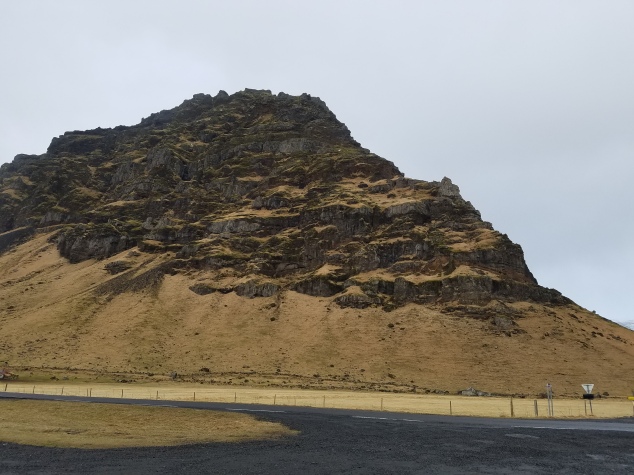 This rock, just to the left of that farm pictured above, is the volcano 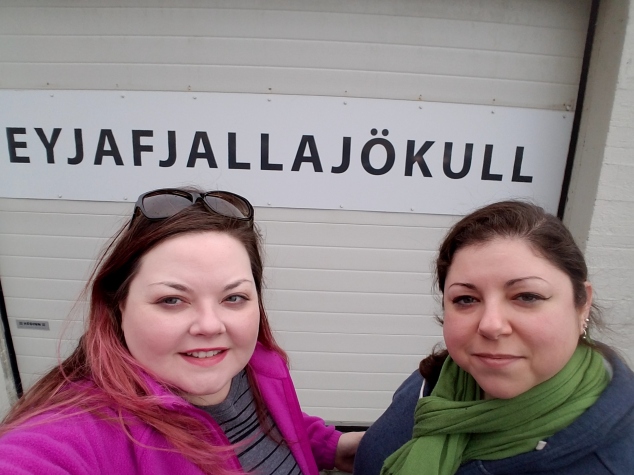 Maybe not our best picture, but I mostly wanted to show off the sign behind us.
Yes, that is the name of the volcano that erupted in 2010, and no, I have no idea how to pronounce it

Oh, and the cows totally made it (thought I left you hanging, didn’t you!)
We saw them turned loose from the barn in the film, running through the fields, tails held high in excitement. I may have cheered out loud ♥

After our early morning stop, we headed East to visit the waterfall of Skogafoss, which stands 60 meters tall (196 feet) and is one of the most impressive waterfalls in Iceland – at least that’s what our guide told us.

The waterfall of Skogafoss, and this picture of an elated Ms. W. getting drenched by the mist – gives me pure joy.

While at Skogafoss, we figured out what that Micheal Jackson song was, the one we couldn’t remember the drunken night before 😉
And then we may have then stood in a large, muddy field, before a large, watery waterfall, playing that song on a cell phone (totally using the wi-fi from other tour buses, as ours never seemed to work!) and singing along loudly. Well I did at least. We also took lunch here – then we got back on the bus and headed to our next stop. Where did we go? You really want to know? Alright, alright, calm yourself…keep reading!

It was a Folk Museum (ta-da!)  with an outstanding collection of farm and domestic artifacts typical of Iceland’s past, as well as some of these turf built houses. I didn’t get much out of this stop – a bit boring, except for the neat little houses we explored. And we were a bit distracted during this stop, attempting to locate something that had gone missing, and feared may have been left at the previous night’s (haunted) hotel. But I still managed to snap off a few pictures… 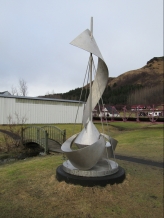 Some sculpture around the Folk Museum ~ Click to make bigger! 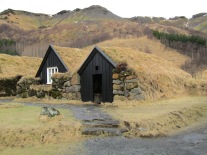 These are the Turf Houses. We got to walk around inside of them – they are not built for tall people, just FYI – (click the pics!) 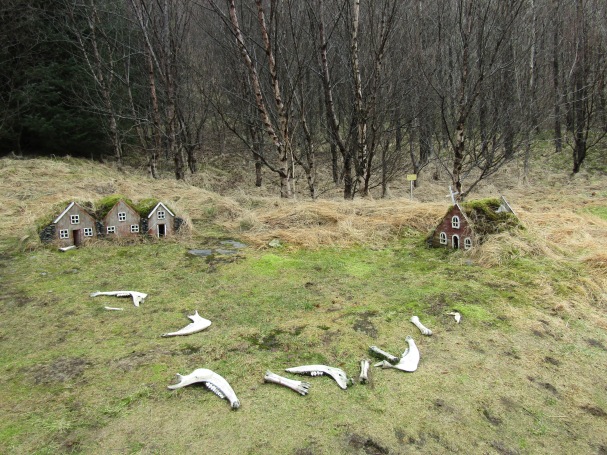 At first I thought these may have been mini turf houses built for the Icelandic Elves (The Hidden People), but apparently the elves in Iceland are people-sized and live in rocks – sooo…yep, no idea.

These cracked me up. They hung in the school house, and shows a cautionary tale of a man, married with kids, who begins drinking, then dies! Our guide explained it was to warn against the dangers of drinking, prompting one of our group to pipe up and say – this is the part that cracked me up – “Oh, I thought it was about the dangers of being married.” ~I agree with that good man 😉

In the afternoon we headed to the beach, Reynisfjara Beach to be exact, in South Iceland. There we strolled along the black, lava-sand beaches, saw a cave where Russell Crowe was once naked, and learned about the dangers of sneaker waves! 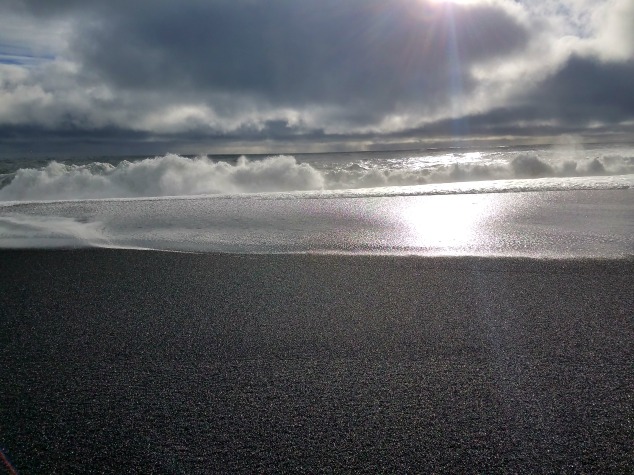 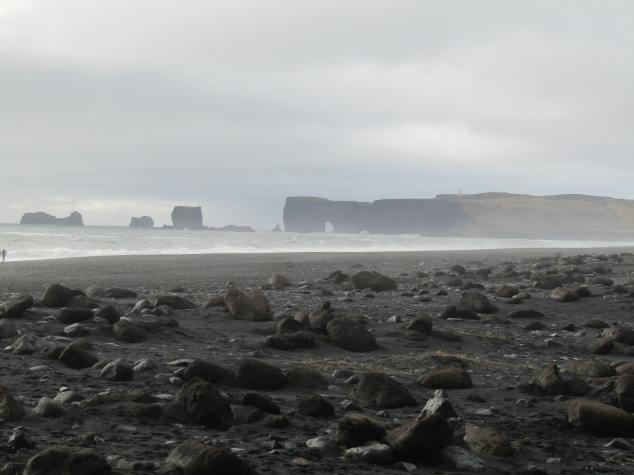 Rocks on the beach, stretching into the sea

The black sand is basalt rock, or lava rock, worn down into grains of sand

Footprints in the sand

The tide coming in

There were so many tales of trolls falling in the water and parts of them sticking up, that I can’t look at these rock formations without seeing a troll face and his umm…’member’… sticking up out of the water 😉

The cave were Russel Crowe was naked. I know, impressive!

This was about tourists dying from the super dangerous ‘sneaker waves.’ They reach out of the ocean unexpectedly and sweep you out to sea! I’m glad we didn’t die at the beach today…

After the beach, as the sun began to set, we made a photo stop. In Iceland, as most of the land is made up of lava rock, there isn’t much natural soil laying around. Most of the beautiful greenery seen around the island is moss growing on the rocks of the lava fields. After a few days, as the snow melted off a bit, we got to see the bright emerald beauty of this stuff – so pretty. 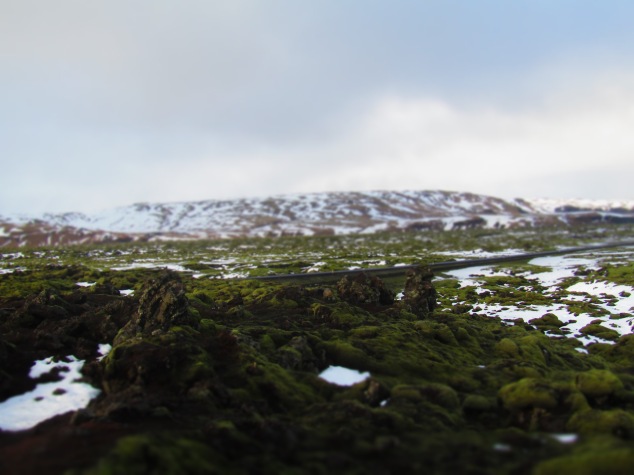 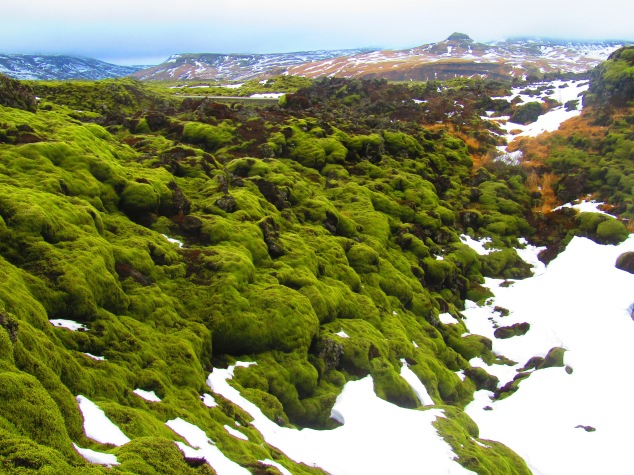 Tonight we stayed at the, very nice, Hotel Laki (Efri-Vik), which is near Kirkjubaejarklaustur (don’t try to pronounce it, you’ll just hurt yourself) in the Vatnajokull National Park Region. As it’s located out in complete darknes, it’s ideal for Northern Lights searching. I think we saw the most impressive lights of our trip while staying out here – from the rooftop of our hotel – but that’s not until tomorrow night – stay tuned!

Night view, looking down from the roof of our hotel, at the cabins you can stay in