I have no idea, but I think we can all agree the statues in this country are fricken’ bizarre!

Ahh, Day Four…by this point we may have been beginning to feel the tired, but ain’t nobody got time for that, we still had four more days to go – sleep is for the weak!

This morning we traveled along the scenic shores of the Hvalfjorour fjord (say that three times fast), and made our first stop at an Icelandic wool outlet store – Alafoss – where Ms. W. got some of this gorgeous, colorful yarn, and I purchased designer chocolate (yep, designer!) and some souvenirs for the peeps back home. 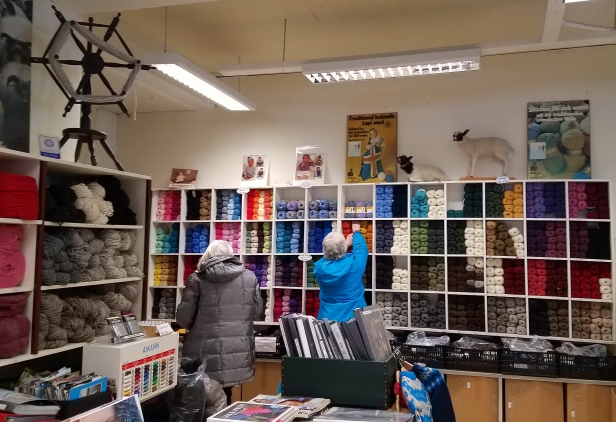 We then turned inland to Thingvellir National Park, which happens to be a UNESCO World Heritage Site. Now, I can hear you thinking it – what in the world is a Thingvellir?! Well, read on, surprise history lesson comin’ atcha!
*Factoid: In Icelandic Thingvellir is written like this: þingvellir – so we’re going to use that from here on out.
þingvellir is one of Iceland’s most important historical sites, fundemental to the history of Iceland and the Icelandic Nation. It was here that their first ‘General Assembly’ was founded. In fact we got to stand at the edge of this ancient parliamentary site. It was here the Law Speaker (Law Rock), and goðar (chieftains) enacted new laws in the Logretta (Alþingi’s legislative assembly). Within the þinghelgi (parliamentary site), those who attended were immune from vengeance and vendetta. At Alþingi, people lived in shelters or “booths,” whose overgrown foundations were still visible to us there. Some of the lands first laws were made here, wow! Okay, now really if you want to know more – google it, I’m not a history book. 😉 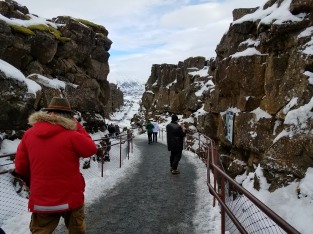 We walked down through this fissure to get to þinghelgi 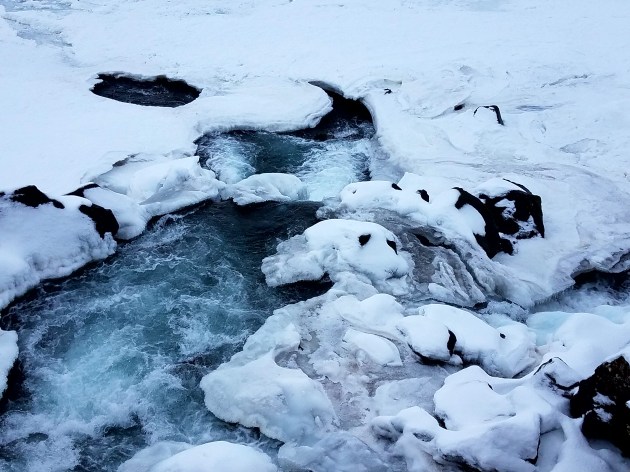 The view while standing at the þinghelgi, bridges leading out of the fissure, and a bubbling brook we walked over (click to see the pictures bigger!)

Small confession, as we were leaving this National Park, I sped walked back to the bus, leaving everyone in my wake – so that I could use the toilet on the bus (just to pee, calm down). Which was hidden in the back stairwell, and much like the Tardis, this bus bathroom was surprisingly bigger on the inside! I still wonder how they got something that sizeable in a space so inconspicuous and small. Anyway, I digress…

Next we headed to the Geysir geothermal fields, stopping  first at the restaurant they have there on site to sample some of Iceland’s freshly baked hot-spring bread (they lower the bread into natural steam vents in the earth to cook it), smothered with delicious Icelandic butter! Now, we were supposed to eat this bread, which is dark and somewhat sweet, topped with the butter, then topped with sliced geothermally boiled eggs, and strips of local herring. But let’s just say between the Viking Sushi and the Hakarl (rotten shark) the idea of eating eggs and fish, just did not work for me at this point. But! on a brighter note, that bread and butter was amazing! And they served it with chilled Geysir schnapps, which I was saddened to discover will probably forever taste like rotten shark to me because of that Hakarl from yesterday (dang you Hakarl :::shakes fist::::) But, umm, yeah…I drank it anyway – haha! What?

The chef slicing hot-spring bread – can you see the butter, eggs, and herring there on the right side of his bench? And you thought surely I must have been kidding!

After our snack, and with schnapps coursing through our system – I mean we may have taken more than one ‘sample,’ – what?! – We walked across the street to visit Strokkur, a.k.a. “The Churn,” a still very active geysir that erupts every 5-10 minutes. I got some video of it, which I may attempt to upload to youtube and link here, but for now, enjoy the pictures below…Yay!

Click to make the pictures bigger! And see a picture of Strokkur’s geysir hole and the geothermal field we walked through, which was covered with a variety of hot springs and bubbling pools – oooh, aaah…

After the spitting, wet hole, we ate lunch, got back on the bus, and headed to one of my favorite sights of the entire trip – Gullfoss, “The Golden Falls”, a double waterfall that tumbles 34 meters (about 111 feet for all you ‘mericans out there 😉  ) into the Hvita River. Check these out! 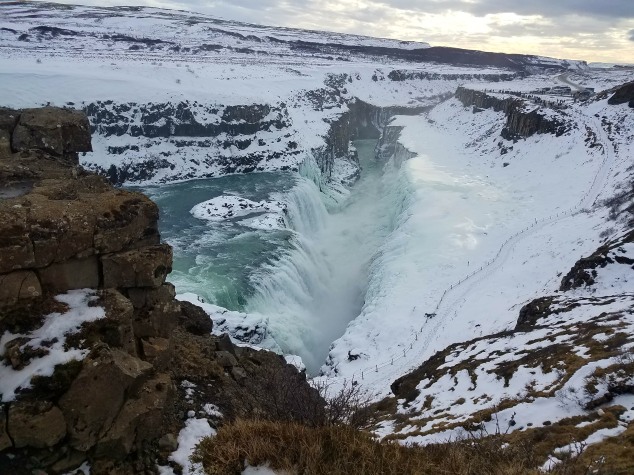 Ladies and Gentlemen – a double water fall. I’ll say it for you ~ Wow! 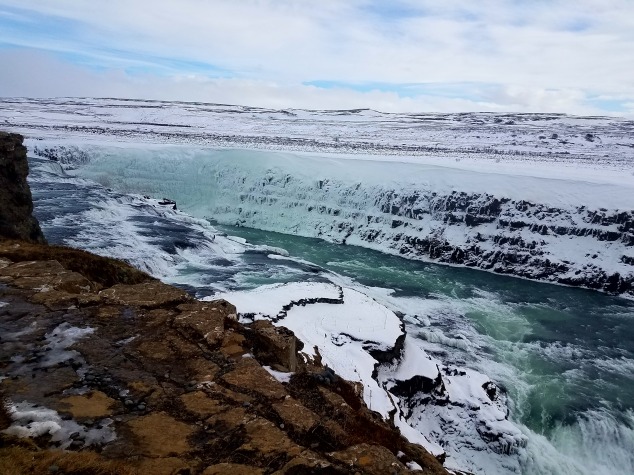 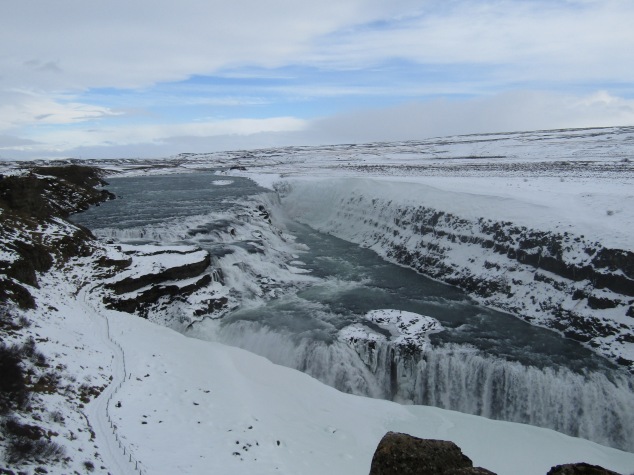 You can only see one of the falls in this picture, as I’m standing ‘above’ the other one here.

I got all fancy with my photography on this one 🙂 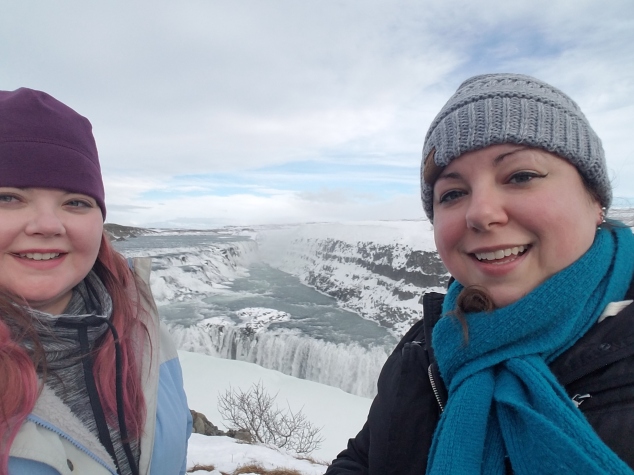 Well, the day is still not done, from this beautiful, misty, windy, chilly site we headed to an Icelandic Horse Farm.
Side note: it took a lot of time and febreeze for my jacket and scarf to stop smelling like horse poo after this visit – uggh!
The lovely horse trainer gave us a talk about the Icelandic horse.  We learned they are descended from the Mongolian pony, and since being brought to Iceland by the Vikings, have maintained their pure bloodlines. They allow no other breeds of horse into Iceland, and while they export many of these horses, after leaving the country, no horse is ever allowed back into Iceland. In fact, if these horses are taken out of country to show or compete, they are then left in the other country – never to return. I know, right?!
Also, while most breeds of horse are known for having 3 gaits (or 4 as I know it to be), the Icelandic horse has 5 gaits, two of which are fairly unique to them, and while the population of Iceland is about 330,000 people, they have over 100,000 horses – in case you aren’t so good with the maths, that’s 1 horse for every 3 people in Iceland – Then the lovely horse trainer gave us a demonstration of each gate, had her horse drink beer, and after she’d gotten him good and liquored up, he started giving her kisses! 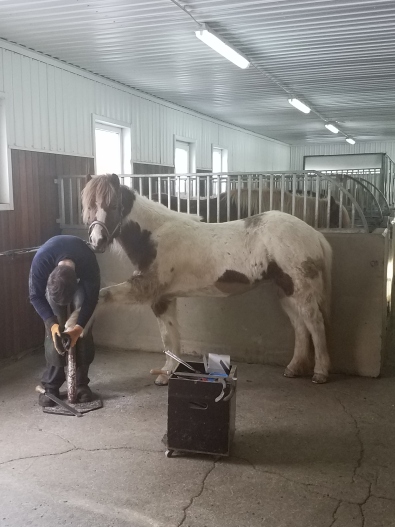 The farrier was visiting when we first got there and Ms. W. caught this too cute pony mid-pedicure. (Click to see pictures of the beer drinking, kissing horse bigger!)

On the same farm they had a geothermal greenhouse – inside was a lil’ restaurant with fresh basil on each table that you could cut and add to your meal, too cute! 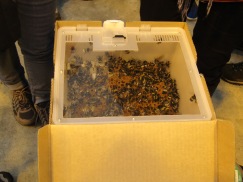 Some cute Icelandic guy blah blahing about tomatoes and how they have their own bees in here to…you know…do what bees do…you know! 😉
And someone hiding in the basil ~ who could that be? Surprise, it’s me! 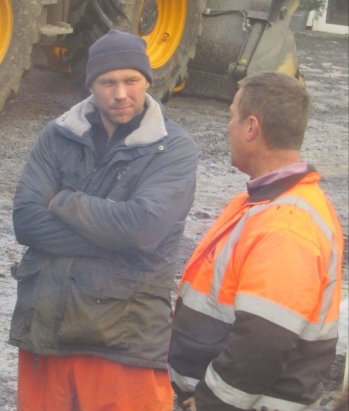 Tonight we stayed in Selfoss, at the FossHotel Hekla. Now let me tell you a little something about this place – Ms. W. and I had NO IDEA this was even a nice hotel until we saw pictures of the rooms online. The reason for this? Because our room was like the basement of rooms – small, dingy, frightening, and more than likely haunted. Look at our hotel key for goodness’ sakes!

Check out the soulless eyes on this creepy, dead-bride, lady – wtf?!

So maybe we did have to drink just to get through night here, but it was only one night. We saw some faint Northern Lights tonight, I drank too much, sang too much, walked around in the snow too much, laughed too much, Ms. W. dropped her phone off the balcony into a snow drift (and you know what happened next Ms. W.! LOL) – and we couldn’t for the life of us remember how that one Michael Jackson song went, le sigh. 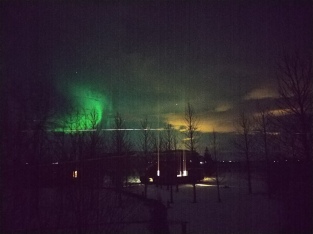 See the faint Lights there, no? Well you gotta click to make ’em bigger!